Another week, and more boss madness! Right now our main focus is trying to develop Zhamla’s combat identity. The first version of his fight is very on rails, and even though it is pretty difficult for many players at that point in the game, it’s far from what would be a good final boss, especially after fighting bosses like Luke and Bishop. Therefore, we are moving away from his heavily pattern-based AI to something more intense! Our first goal with the fight is to create a strong sense of threat – it’s something that’s is a little trickier/more expensive to achieve when the boss consists of one large sprite and each animation is costly to produce (big sprites = longer to animate), so we are trying to find ways to give him a lot of oomph without having to add a lot of animations. After all, we too would very much like to release this game sooner rather than later by now 🙂

Here’s a little bit of gameplay from one of our recent iterations. You can see a bunch of Zhamla’s attacks and new patterns here, along with the inferno you saw the work in progress of a couple weeks ago:

Work on the production book continues as well. When I first started writing it, we used a vertical layout, but now that we’re starting to move into editing and thinking a little bit more about the layout of each page, we’ve swapped to horizontal to get a better feel for how things will look in the end. A horizontal layout allows us to include larger and more detailed screenshots and progress pictures, which is pretty important since a lot of the development is on the visual side. I’ve already made a few custom images that will be featured in the book as well!

Here’s a little sneak peek of one featuring hats: 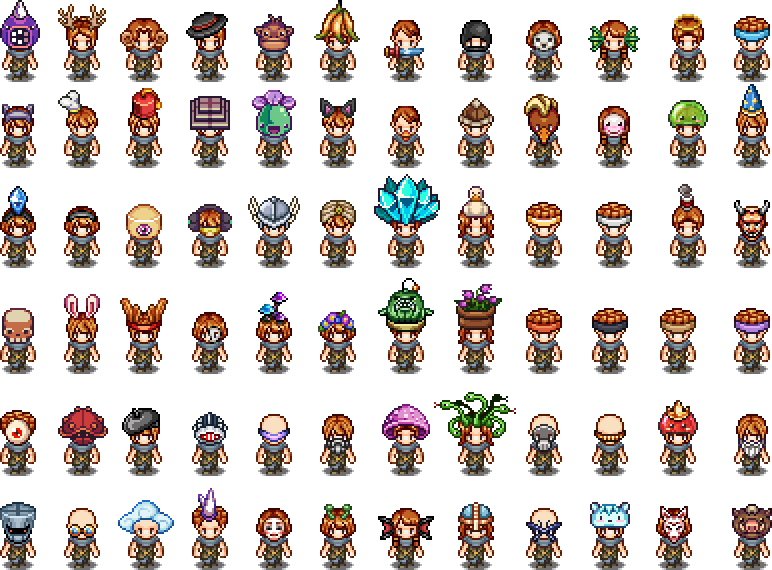 Now, after today we’ll be taking some time off to celebrate christmas and new years with the family. The next Secrets of Grindea recap will be available on the 9th of January, after we’ve been back at the office for a week.

The rest of the blog will continue on as normal!